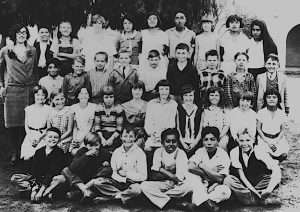 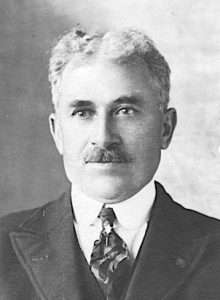 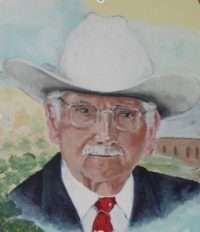 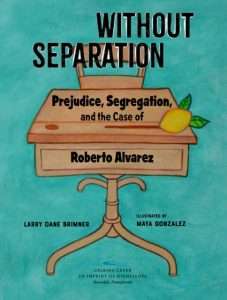 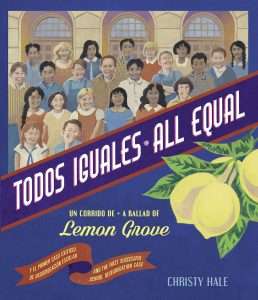 If you would like to purchase Todos Iguales – All Equal, head to our secure online store at Square One

The Great Depression (1929-1939) blanketed the United States and the world. People of means often lost everything. People with no means just lost everything. In tiny, whistle-stop Lemon Grove, California, people relied on their home gardens and local orchards for food; many relied on the latter for livelihood. They made their own clothes, walked everywhere and generally made do. The little town, which arose during California’s “Second Goldrush” (rise of the citrus industry), had no industrial base beyond its citrus orchards and scant retail. There was a general store (Sonka Bros’ General Merchandise), a couple of churches, a meeting hall built by the local women’s club in 1922, and the lone Lemon Grove Grammar School built in 1924.
The schoolhouse held 165 students in grades 1 – 8. It was overcrowded as were the two outhouses, the latter a standard domestic feature of the time. The five-member school board was led by Henry “Andy” Anderson, who ran a local auto repair shop, was a volunteer fireman and had been an original WW I flying ace. Lacking money to expand the school or install indoor plumbing, the board cast about for another method. Enter, alas, the idea of an “Americanization School” for almost half the students, some 75 children of Hispanic origin. Some were fresh from Mexico, but most had been born in the U. S. These families were clustered in “the old neighborhood” on Olive Street running from North Avenue south to Central Avenue. They built their own homes, kept kitchen gardens, made their own clothes, attended St. John of the Cross Catholic Church
and tended to keep to themselves.
Americanization schools had been popping up around the Southwestern U. S. at least since the onset of the Depression. “Americanization” implied noble intent to benefit immigrants, but was actually thinly disguised segregation. This represented massive ignorance in many Caucasians as they tried to segregate other Caucasians, for Hispanics are an ethnic subset of Caucasian like French, Italian, Spanish, Irish, large parts of India and so forth. Under California law in 1931 it was legal to
discriminate against Native Americans, African Americans and Asian Americans–but not Hispanics. The Bliss Bill was making its way through the state legislature in an effort to include Hispanics among the banned groups.
Andy Anderson and his board never checked state law, but ham-handedly proceeded in the summer of 1930 to plan a separate building for some 75 Hispanic students to be built in “the old neighborhood.” The excuses offered were 1) the main campus was overcrowded; and, 2) the Hispanic children wouldn’t have to cross the railroad tracks to get to the campus. During the fall term, the separate school was built for a whopping $5,000. This sum paid for a board-and-batten one-room schoolhouse with a shingle roof, two teachers, a flagpole for the Stars & Stripes, no playground equipment, no school nurse and used books and desks. That $5,000 could have paid for new classrooms and some plumbing at the main campus–but that wasn’t the purpose. Old-fashioned segregation was the purpose.
The other segregated schools around the Southwest did not provoke the reaction the Lemon Grove school met–outraged, instantaneous legal action by Hispanic parents. After all, the word was already out in the town. On January 5, 1931 when the children returned from Christmas vacation, only a tiny handful reported to the campus. The reluctant principal, Jerome Greene, who had tried to dissuade the school board and even sent his own flyer home with the children, met them on the front steps and told them a new school had been built just for them right in their neighborhood. Greene knew that the school board had been abetted by the PTA and local Chamber of Commerce, members of which shared the view that Hispanics were dirty, diseased, spread lice and were “backward.”
The parents promptly dubbed the separate school “La Caballeriza” (The Barnyard). They went on strike, an action daily covered in the San Diego Union with headlines like “Day 15 of the Lemon Grove School Strike.” Unlike 21st century protesters, the parents were calm, dignified, thoughtful and politically savvy. They called their committee Los Vecinos (The Neighbors) and held barbecues and rummage sales to raise money to hire the lawyer recommended by the Mexican Consulate in downtown San Diego. But Fred Noon took the case pro bono anyway. He knew it was a slam dunk. So did the courtly judge, Claude Chambers.
On March 11, 1931, less than two months after the school strike began, the Writ of Mandamus was handed down awarding the case to the plaintiffs. About a week later the children were all back in school. The coup de grace in the courtroom came when Roberto Alvarez, 12, born in La Mesa, said he spoke perfect English and had no trouble keeping up with his studies. This bright boy grew up to found Coast Citrus, a binational produce import-export firm with offices from San Diego to Miami and north to Los Angeles. He died in 2003 and has been memorialized at length by the Lemon Grove Historical Society.
But the Lemon Grove School Board wasn’t through. In a final vindictive act, they fired Jerome Greene.

Final Note: The Lemon Grove Historical Society worked extensively with famed children’s author Larry Dane Brimner on his new  book, Without Separation (Calkins Creek 2021), illustrated by Maya Gonzalez, and author-illustrator Christy Hale on her bilingual book, Todos Iguales/All Equal (Lee & Lowe 2019), both available in our Parsonage Museum gift shop and suitable for ages eight and older. Both ringingly address the nation’s first Hispanic school desegregation case in the U. S. Lemon Grove’s parents stood up for their children and we are proud of them and of our schools, which became the forward-thinking district it is today.