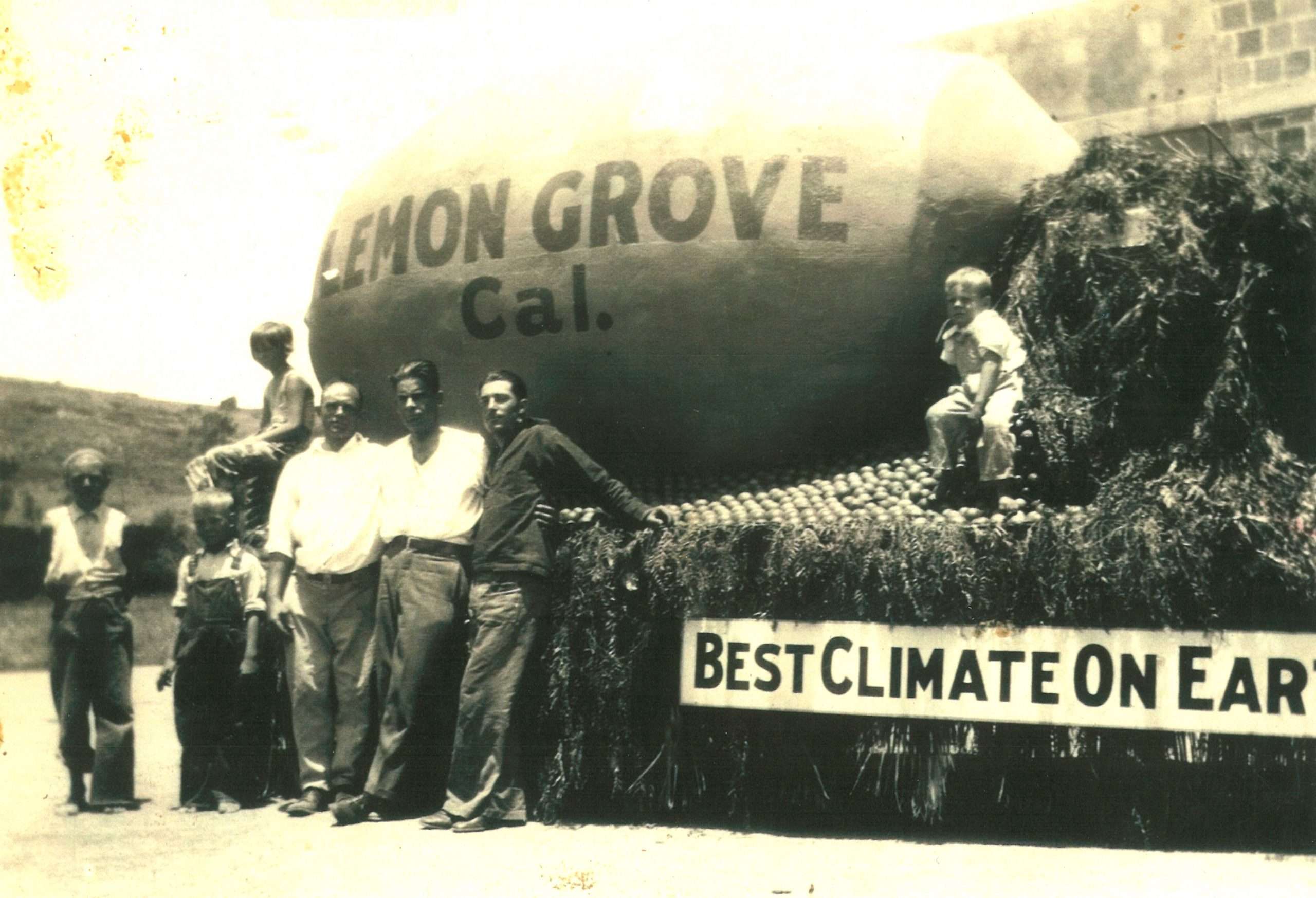 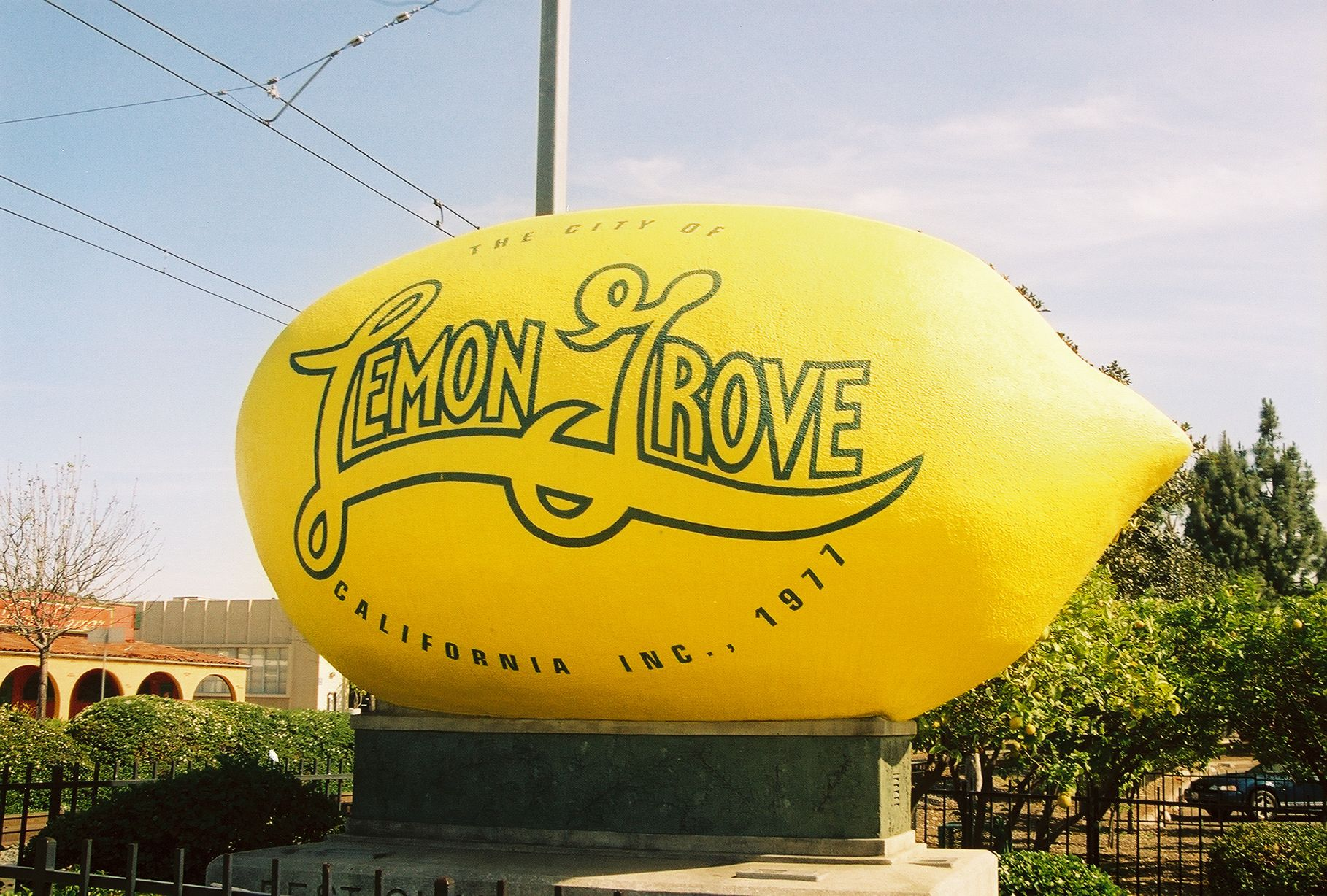 Commissioning Alberto Treganza to design The Big Lemon was driven by the town’s then chamber of commerce to draw attention to the annual crops of award-winning lemons, the beauty of the landscape and the historic nature of the community, which was promoted in a chamber brochure with, “See Naples and die; see Lemon Grove and live!”. In 1928 the automobile had swept the nation and suburbs were competing with agricultural lands for development. The American Country Home Movement was in full swing (the H. Lee House was built in part due to that movement).

Alberto Treganza had won fame as an architect and artist in the Western states. As well, the Treganza family was well-known in Lemon Grove for its several talents, among them the horticultural skills of the patriarch orchardist Eduardo Treganza. Alberto was chosen to design what became an enduring civic icon, The Big Lemon. He began by asking local lemon growers to bring him their prettiest lemons. Out of a short list of 12, Alberto chose one as his model (oh, to know the raiser of that winning lemon). A group of local ranchers volunteered to build the Lemon.  Led by local grower and building  contractor, Edmund J. Dunn, an ex-patriot British citizen, whose orchard planted in the early 1920’s thrives to this day, work got underway in early 1928. The goal was to produce a float for the July 4th parade in downtown San Diego.
The chamber of commerce also sponsored the first Miss Lemon Grove contest  in 1928. The winner was Amorita Treganza, 16, Alberto’s 3rd daughter. She would ride on the float on July 4 accompanied by five little princesses, one of whom was her youngest sister Adalaida Treganza.
Using 2 x 4 and 2 x 6 timbers, chicken wire, plenty of plaster and yellow paint, the Lemon evolved into a 3,000-pound symbol that was hoisted onto a flatbed, adorned with lemon branches and fruit, and a sign proclaiming the town’s motto (coined in 1925 by Tony Sonka), “Best Climate on Earth,” and hauled downtown to the Fiesta de San Diego Parade, where it won third prize.  Note: There were two green-painted signs prepared for the motto; one hangs inside the Parsonage Museum of Lemon Grove and is lovingly cared for by the Lemon Grove Historical Society.

A Star Was Born

Once built, what’s to do with it? The Lemon was hauled to four more July 4th parades through 1932 when the locals felt enough was enough. We are not certain where it was stored between parades–but the outpouring of support after its parade career ended prompted businessman Tony Sonka to  suggest mounting it on a plinth, which he paid for, and displaying it in perpetuity outside the front of his general store by the railroad tracks. With relief, the town acquiesced and a star was born.
But for minor moves to accommodate train and trolley tracks, the Big Lemon has remained at the main entrance to town from that day to this. One dramatic day in 1984, the Lemon was moved to accommodate a new trolley track and was hoisted skyward, making for sensational photographs. The first Miss Lemon Grove was present in the crowd for this rite of spring.
The Lemon was nominated by the Lemon Grove Historical Society for an Orchid in the 1995 San Diego Onions and Orchids competition; it won the Neighborhood Award from an enthusiastic jury.