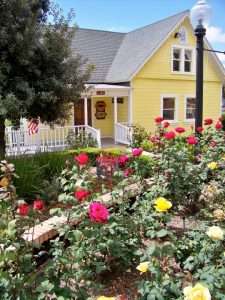 The Atherton Chapel is a redwood Folk Victorian built in 1897 as the city’s first church. It was named for the Congregational missionary, Isaac Atherton, who inspired the formation of the church and who donated the first $100 toward its construction. The building served as the only church in the community until 1912 when it was moved from the corner of Main and Church street to its present location at Church and Olive. The Lemon Grove Community Club, an early local improvement organization, purchased the building and remodeled it for use as a community meeting hall. The building would be sold in 1945 and used as a residence for many years.

The City of Lemon Grove acquired the property and between 1997 and 1999 the Lemon Grove Historical Society renovated the building. The Society received the 2001 Governor’s Historic Preservation Award for the project.

Renamed the Parsonage Museum, this two-story museum is open Saturdays, 11 a.m. – 2 p.m., and weekdays by appointment for tour groups. Admission is by donation (free for children 12 and under).