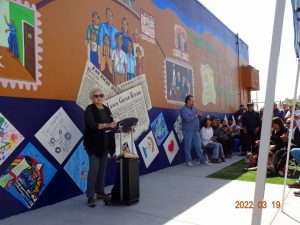 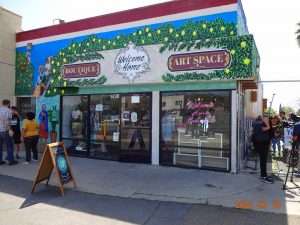 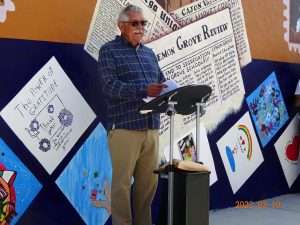 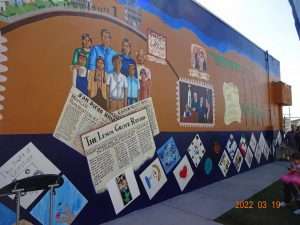 Mark Lane, CEO, Minority Humanitarian Foundation, organized a superb dedication on March 19, 2022 of the new mural on the wall of 7963 Broadway. The artist, Mario Chacon, was present, along with a who’s who of the Mexican American community in Lemon Grove and environs. Organizers had to set up more chairs to accommodate the overflow crowd.

With Lane as emcee, the program opened with artist and Kumeyaay descendant Steven Garcia playing a celebratory solo on a lovely pearwood flute and performing the sacred eagle dance in a spectacular feathered cape and white rabbit fur headdress (see attached video). Amalia Alvarez, granddaughter of the lead plaintiff in the case (Don Roberto Alvarez, Sr.) read a poem she had composed for the occasion. Councilman Jerry Jones, mayor pro tem, spoke briefly and movingly for the City of Lemon Grove.

In the crowd were Councilmembers Jennifer Mendoza and George Gastil, former school board member Jay Bass, and Palomar College retired faculty member and cohort descendant John Valdez of Lemon Grove Oral History fame. Dr. Robert Alvarez, Jr., retired UCSD faculty and son of the lead plaintiff in the case (the famous Don Roberto Alvarez, Sr.), gave the keynote address as the. Sr. Mario Chacon wrapped the program with gracious thanks to all and countless photo opportunities.

But the star of the show was diminutive Maria Luisa Beltran Padilla, one of the original cohort of 75 shut-out pupils. She will be 100 in June. Needless to say she was engulfed by a crowd of well wishers. Despite being wheelchair-bound, La Señora Padilla was the last word in charm and enthusiasm.

The mural is stunning. Like the façade of Lane’s building, it focuses on lemons and the people who picked them. The purpose is to render in paint the content of Lemon Grove’s 1931 school desecration case–the first in the nation involving Mexican American pupils.

The case was short, from January 5, 1931 to March 11 when the Writ of Mandamus was handed down by Superior Court Judge Claude Chambers awarding victory to “Los Vecinos” (The Neighbors), meaning the savvy, dedicated parents of the youngsters for whom a bigoted school board  built  a separate, shabby schoolhouse in the “old neighborhood” on Olive Street between Broadway and North Avenue. “Now they won’t have to cross the railroad tracks to get to school” was the feeble rationale.

The segregated school was dubbed “La Caballeriza” (The Barnyard) for its rudimentary appearance. After the big win for attorney Fred Noon and the protesting parents, the school board minutes were a caution:  “Things didn’t go our way, so we’ll go back to what we were doing before.” What they were doing was actually fine. The children were friends, playing together on sports teams and collaborating on class projects. Mrs. Catherine Elliott taught the non English speakers the language for an hour a day with a view to mainstreaming them by grade four. She was the ESL teacher (English as a Second Language) before that phrase entered the language.

So the little city that could, learned the error of its ways and went on to build the most integrated town and school district in San Diego County. It took the whole community pulling together as we saw this morning at the mural dedication. “Sometimes there’s God.”*