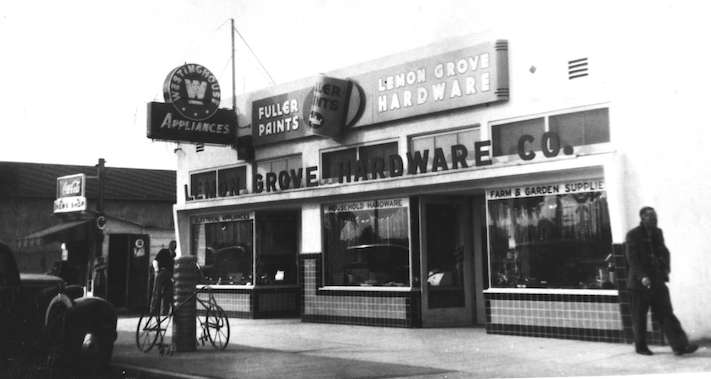 A look back at Lemon Grove 69 years ago

The fabled Lemon Grove Review competed with another weekly, the Lemon Grove Homeland News published by H. C. Reed and edited by Robert L. Curran. An annual subscription was $1, and the paper was headquartered at 3443 North Avenue in the same building with the Review.

Above its banner, Lemon Grove Homeland News ran the motto, “The paper that has helped build Lemon Grove since 1932.” This, even though half of its eight pages were devoted to La Mesa. Below the banner was “Successor to Lemon Grove News and Lemon Grove-Encanto News-Beacon.”

The Lemon Grove Historical Society has just two editions of Homeland News. Does anybody have more to share? Call home if you do.

Unlike the Review, with its take-no-prisoners approach to news gathering, Homeland News specialized in cozy chat, comfy recipes, foodie ads, the occasional news story (see below), and the ubiquitous Legal Notices, in which we spotted this significant item:

Lemon Grove Hardware is Born: John E. Sanders declared, “I hereby certify that I am transacting business at 3340 Main Street, Lemon Grove, in the State of California under a designation…to wit: “Lemon Grove Hardware Company”…His statement was notarized on Feb. 11, 1949 by Vroman Dorman, notary, lawyer and father of the future first mayor of Lemon Grove, James Dorman.

John ran the store with his wife, Elza Sanders, in premises built by Tony Sonka in 1945 on the site of the old Kleinfeld house on Main Street (just north of Lemon Grove Bakery). When John died in 1962, Elza carried on until 1966. (See the above photograph of the store.)

In 1939 the Sanders built an elegant, pale grey Cape Cod style home on the corner of Main and Central, which became a landmark in the town. The home was showcased in Home & Garden for its state-of-the-art kitchen and stylish interiors. John and Elza raised their two children there, and had only to walk up Main Street to their hardware store. In a jarring moment for the town, the house was later demolished to make way for the Lemon Grove Community Church (“The Lagoon”).

Today, the Sanders’ daughter, Sharon, is a leading light in the Lemon Grove Historical Society and a popular docent in the Parsonage Museum located a stone’s throw west of her former childhood home.

Home Cooking on Trial: Homeland News reported the dismaying news. The Lemon Grove School District took moms to task for neglecting fruits and vegetables in their children’s diets. In a three-day survey, pupils in grades three to six recorded what they ate and what they refused to eat at home.

The district rated over half the diets “good,” one-fourth drew “fair,” while one-fifth got the dreaded “poor.” In other words, roughly a third of ‘Grove kiddies were undernourished according to the survey conducted by the Curriculum Committee of the Lemon Grove Teachers Club. Milk and meat were abundant, but fruits and leafy green and yellow vegetables were sparse. This, in a town where many yards sported fruit trees from the old orchard days.

The district was alone in San Diego County in conducting the survey and also ran a poster and jingle contest in which children won coupons for healthy foods from local stores.

Dear readers, seven decades on, everything old is new again. Our school district remains in the vanguard of the healthy lifestyle movement. In 2011, in an effort to combat childhood obesity, local school breakfasts and lunches were overhauled to emphasize whole grains, fruits, vegetables and protein. Modern groups like HEAL Zone and Thrive Lemon Grove are part of this effort.

Parties, Parties All the Time: In 1949 the Lemon Grove Woman’s Club, in its popular 1922 clubhouse, logged four to five big parties a month in a social blow-out unmatched since the fall of Rome. To wit:

Norwegian Dinner Dance featured the film “Wings Over Viking Land” and a fragrant buffet of fish balls, fish cakes, fish sticks, fish fritters, fish casseroles and pickled herring catered by the good women of that darling Norwegian restaurant that once stood on the corner of Lincoln and Imperial (near where Aaron Lock & Key is today).

The clubhouse hosted hosannas to marriage, matched only by Henry VIII when the William Toomires tossed not one, but two, parties to celebrate their 11th wedding anniversary. The first party was “pre-anniversary” (no gifts), while #2 was the real deal (with gifts). When the Toomires journeyed to La Jolla for party #3, they were followed by nearly 50 bacchantes. If these revels greeted their 11th anniversary, what did they do on their 50th? Call home if you know.

Drive, She Said: Not to be outdone in the wedded bliss dept., Gerald and Edna Payette threw six parties to celebrate their engagement. On the seventh day they rested presumably because they were driving to Yuma for the nuptials. Edna wore a royal blue suit with pearls and white orchids, while Gerald sported his U. S. Navy uniform.

The large ad urged you to “see with your own eyes” and fathom “when army physical exams revealed that our wartime generation was far bigger and taller, Dodge started planning this great new car.”

But were folks that big? Or was Dodge just thinking of big profits? No question that successive generations have enlarged, tipping the scales at double and triple the weight of the Greatest Generation. Apropos, when the Lemon Grove Historical Society mounted “Lemon Grove in World War II” in the Parsonage Museum in 2003 and called for vintage uniforms, the board was stunned at the small, slim navy, army and nursing uniforms that arrived on loan. No way could any of us slip into those svelte numbers.

“WE KNOW the person that took the metal mustache cup and saucer from our showroom floor. If this person does not return same, we will prosecute. No action will be taken if it is brought back in PERFECT CONDITION. Trader’s Mart, 318 El Cajon Blvd., H4-7095.

“YOU STOLE our dog Lappy, white with big black spot on tail and rope on collar. Give him back, no questions asked. We love Lappy and can’t live without him!! Call H4-7191.

Wisdom of the Ages: The fillers in Homeland News ranked right up there with the Review’s…

If you fear heights, do not stand on a ladder, but remain standing at ground level while others do the work.

If you become dizzy while square dancing, stop.

And so it went in the Big Lemon as winter, 1949 waned and the populace quested after business, education, social events, good food, latest trends and other necessities that lent cozy comfort to a unique local scene.