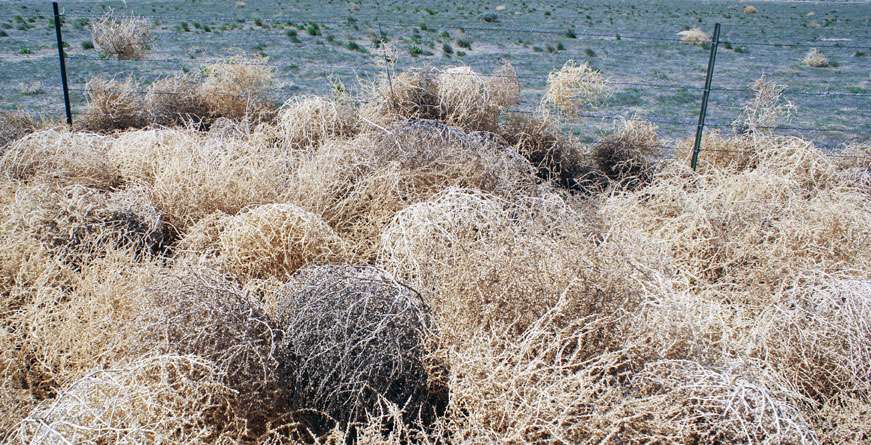 T Day: They fought on the lawn. They fought in the orchard. They fought on the street. They never surrendered. It was hunt down and obliterate the dreaded Salsola pestifera or watch the Big Lemon go under as thousands of dry, demented, dastardly tumbleweeds, some seven feet in diameter, rolled through town sticking you, your kids, your pets and your property with prickly seeds that just wouldn’t let go.

Early in 1962 some 400 anti-tumbleweed militia from Lemon Grove and Spring Valley, wearing gloves, goggles, boots and long sleeves, and armed with pitchforks, rakes and shovels, assembled at 8 a.m. at Mt. Miguel High School and Kerrigan’s Liquor Store (Lincoln at Imperial), then fanned out across the region to slice off tumbleweeds at the root and burn them dead.

But, horrors! At noon it poured with rain and 130 tumbleweed guerrillas were sent home—but not before several hundred of the weeds had been torched by firefighters. The troops vowed to return at dawn on Feb. 10 and “fight this menace,” according to anti-tumbleweed chair Hibbard Stubbs.

“Some think Tumbleweed Day is a joke,” said Stubbs. “But that was before they saw how many there are and how big they are. You see ‘em coming at you and you’ll fight to the death to protect your property.”

Several local TV stations sent crews to cover the battle for the nightly news, prompting anti-tumbleweeder, Howard Potts, to say, “Watch us while we give these weeds no reprieve. If it rains again, we’ll be back.”

Aiding the take-no-prisoners effort were Boy Scout Troops 108 and 322, and Cub Scout Troop 308, all earning their community service badges in readiness for Boy Scout Week in February.

On Feb. 10, as the tumbleweed warriors manned their stations, it rained again. Undaunted the troops piled up tumbleweeds and covered them with tarpaulins to keep them dry. The next day the firefighters lit the funeral pyre that reduced the invaders to ash.

The Backstory: Tumbleweeds, a species of Russian thistle, may have left Outer Mongolia and arrived in South Dakota in the 1870s in a shipment of flaxseed. Another story holds that the seeds hooked onto burlap bags and went west with the railroad. Either way the seeds escaped and rapidly adapted to the great plains and deserts of North America. As they spread west, they became the stuff of folklore and legend.

Roy Rogers’ first hit song was “Tumblin’ Tumbleweeds.” No Western movie was complete without shots of tumbleweeds chasing each other in the desert wind. Western housing developments, restaurants, camps, shopping malls, singing groups, boutiques and what-all were named for the noxious weed despite its very real environmental threat.

A lone tumbleweed, with its 24-inch root, can remove 44 gallons of water from the soil, leaving vital plants like wheat to wither and die. Erosion increases as the topsoil dries and blows away during droughts—think “The Grapes of Wrath” and the Joad family leaving parched Oklahoma for California.

But tell that to the chuckling family that filmed this tumbleweed invasion from their car and posted it on YouTube:

Tumbleweeds have never surrendered. Every spring they’re ba-a-a-ck. But, just as tenacious is the entrepreneurial spirit that has made tumbleweed culture a sizable part of the online arts-and-crafts market, to wit:

One tumbleweed marketer hails her crop as “straight from the Western frontier! A great decorative addition to any country western themed party…These babies were meant to roll, so if they’re placed outside make sure they’re tied down good.”

You can get a tumbleweed ringtone for your cell phone, featuring lyrics by 1960s icon Joan Baez:

Your correspondent recalls seeing her three children gleefully rolling a humungous tumbleweed down the street with a neighbor, who shall be nameless, in hot pursuit.

“Stop that tumbleweed!” she shrieked, flapping a rake.

Abashed, the kids halted in mid-roll while said neighbor described the impending doom: seeds hooked to every part of their anatomy as you scratch and draw blood, howling in pain and screaming for mercy before fainting in the heat while the tumbleweed rolled on and on…and on. Yikes!

And so it went in February, 1962 when neither rain nor heat nor gloom of night stayed the soldiers of the Big Lemon from the Tumbleweed Wars. They were descended from ranchers. They knew.